Batch posts are (mostly) early impressions on shows I dropped along the way over the season. Most shows which I stop watching are dropped within the 3 first episodes or I watch through it, but there are times I drop them further in (usually longer shows). The following four are all from this ongoing winter season. 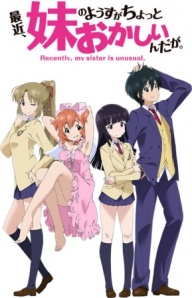 Or ImoCho for short. In English it’s “Recently, my little sister has been a bit weird” (ignore the fact I just translated the title as is, which isn’t what I’ve actually the English title, as far as I know). 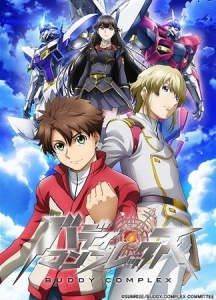 To be honest, I more or less gave up on the show the moment I saw it was mecha. I’ve already mentioned I don’t like ridiculous sci-fi with robots. Add the time travelling enemy on top of that and… well… yeah… No. I would probably bore myself to death even if I gave it a chance. Me and mecha don’t get along and I doubt we’ll ever do. Only time is when everything else kind of weighs more than the mecha and this everything else is full of things I like in a series.

So no. I gave this up to keep myself from boredom. 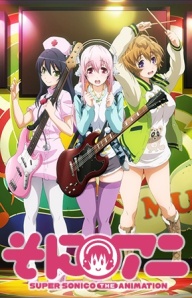 Super Sonico (CV: Ayano Yamamoto) is a model and in a band. And that’s pretty much it. Well, she helps her grandmother in her store and goes to school too.

Sonico is the mascot girls for Nitroplus, a visual novel developer known for their darker stories. They have among others made The Song of Saya and collaborated with 5pb. on Chaos;Head and Steins;Gate, and TYPE-MOON on Fate/Zero. But this is a show about they busty mascot girl who always has headphones on, or something. I can’t help but wonder how the heck she hears ANYTHING.

She shouldn’t. Unless those are her ears. THEN SHE CAN’T BE HUMAN.

I didn’t particular like it. There was no story whatsoever in the episodes I sat through, and although I like some slice-of-life, it just didn’t cope well with my taste.

Also, her manager was weird. Seemed like a nice guy, but was really weird. 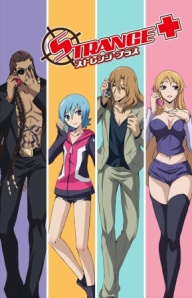 I really like Tomokazu Seki. I reeeeaaaally like him. But this show is just… strange. It’s too strange. It kind of lives up to its name, it’s Strange +. (And now I’m laughing at my own bad pun. I’m too easily amused.)

Except for Seki, it has Ryoutarou Okiayu and Jun Fukuyama, whom both are voice actors I really like, as main characters. But at the end this show is so strange all I can mention is the voice actors. I have nothing else to say about it. The episodes are short, under 5 minutes, so I assume you could get through it if you want to, but there’s no story. I can’t watch this. I just don’t get it. It’s not even funny. Not even so bad it’s funny.

This post is available thanks to the love and support of my readers and patrons. If you enjoy this post, drop a tip on Ko-fi, subscribe on Patreon, donate through Paypal, like this post or give me a comment. All funding goes directly to the blog so I can keep it going.