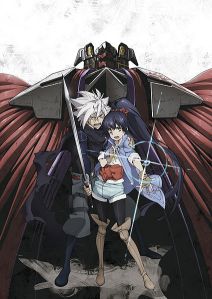 Ame (CV: Megumi Han) is the princess of Ise. In a world where a poison called Shinobi exists, her mother most of her country was destroyed. But she is a survivor and she was entrusted a key to a holy weapon called the Giga Road and she is on a quest to find this weapon and erase all the shinobi from the earth. On her quest she meets the yagyuu – a living weapon – named Suou (CV: KENN).

The premise, idea, concept, was good. The film, not so much. This film is part of a project with the same name as the film and there is comics of it, which might or might not explain more, but there were a bunch of holes in this. I mean, in the 91 minutes of this film, they managed to cram in (be warned: until the end of the paragraph, it’s spoiling pretty much the entire film!!) saving a child from being sacrificed, Ame meeting Suou, Suou knowing exactly where the heck they are supposed to go, Ame almost dying in a sand storm, Ame and co. being taking to some place, Ame getting the key stolen, some guy wanting Ame to get the weapon while another doesn’t want her to reach it, Suou saving Ame from being killed, someone from Ame’s past arriving with a bunch shinobi, Ame heading to the holy weapon, Ame reaching the holy weapon after a soldier from her homeland is killed, Ame finding weapon, weapon which is a huge mecha is not responding, bad guy catches up, info dump by bad guy who I still don’t know exactly how he’s connected with Ame but I’m assuming teacher, guy who didn’t want Ame to find the weapon arrives to save the day, bad guy pretty much ignores it, explosion, something happen and Suou comes for Ame but Giga Road is trying to protect Ame, Suou and Ame get literally connected and giant mecha starts raging, Ame-Suou kills bad guy, an ending song that made me think of tokusatsu drama or Japanese superhero shows, Ame has died, Suou cries.

That’s pretty much the whole thing cutting out some details. That leaves a lot of questions right? That’s not solely because I cut out some things, but because there were too many gaps in this film. It was like a roller-coaster, only you just ran right through the hills instead of following the hill up and then going down hill. No, it was like you teleported between parts of the roller-coaster and only went to ride the last bit. One moment they were at some remote village, then they talk about where they are headed and the next thing we know is that Ame and Sanda – the soldier from Ise – are about to die in a sand storm while Suou is walking ahead as a guide.

I don’t mind cutting out some necessary information, BUT THIS WAS HARD TO KEEP UP WITH. And when did Suou start calling Ame by name instead of being polite? WHEN DO THEY EVEN HAVE TIME TO FALL IN LOVE???

I’m not convinced. Not at all. There are too much information lacking or they rammed in too much unnecessary information. In my opinion, it was a bit of both scenarios.

It’s sad though, because based on what I saw now, it had so much potential… The biggest plus and apparently to me the most interesting thing (read: pretty much only interesting thing) in the entire film is that the soundtrack is by Yasuharu Takanashi, who also made the soundtrack from Fairy Tail, Naruto Shippuuden and several Precure series. He has a pretty obvious style in his composing, so I could immediately hear it was him, but I spent some time in the film just listening to the soundtrack to be completely sure. When I saw the credits, I wasn’t surprised at all.