Kono Danshi series is a series of stand-alone episodes. Rather than writing about one at the time, I figured I should write about both. Be warned though, this post is full of spoilers. But first some general information.

Kono Danshi series is very artistic in a sense of style. It uses the art to show feelings complemented by great voice acting and some musical pieces. Both of the episodes are boys love… kind of. If you watch these, you’ll know what I mean. I guess reading the summaries of the entire episodes could work too.

One again, be warned. Tons of spoilers after the cut! 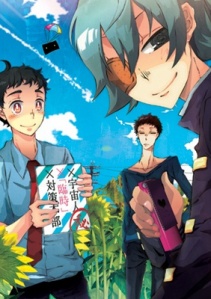 One day aliens start attacking the world. However, only one alien comes and only one specific boy is attacked. He’s the only one who an fight the aliens.

Arikawa (CV: Toshiyuki Toyonaga) from the Special Alien Countermeasure Task Force (or something) one day found this boy, Kakashi (CV: Ryouhei Kimura), and takes him to the headquarters, to his commander Shiro (CV: Daisuke Namikawa), where they three live together, while Kakashi is trying to save the world.

But Kakashi is starting to doubt his motivations. Does he have any friends? What about his parents? Are there anyone he is fighting for? Hanging on to the little hope he has, he cherishes a broken cellphone, which he doesn’t let the other two even touch, because he’s afraid he won’t have any friends. But Shiro promises to show that the world is nice to Kakashi and therefore needs to fix the cellphone, and Kakashi hands it to him.

One day he overhears Shiro on the phone, talking about his parents. They have died. A terribly shock for the boy who has lost hope. He notices the cellphone is fixed, but not a single message has come. In despair he runs off. If he has nothing, he wants the world to end, and he shouts it out. Suddenly several alien ships appear in the sky, not just a single alien. He’s at loss. Arikawa comes running and tells Kakashi that the world is nice, shows the cellphone. A single message has arrived. Soon enough it starts piling up. 10, 20, 50, 100… They just keep coming. He’s missed, loved, not alone. And so Kakashi has the motivation to fight the fleet of alien ships in the sky.

A deep story about motivation and hatred towards the world. How being alone can warp you and how scary things can be. What would you do if you lost all your memories and didn’t know whether you had friends or not, nor where you lived. All you know is that you can fight aliens. you’d be scared. And alone. And as Kakashi, you might hate the world, thinking it’s not nice. But this is of course a very extreme situation. People can hate the world for less. But although the world can be mean to you, it an also be nice, so you shouldn’t be scared to take the leap, if you have the chance. There’s always someone to support you. 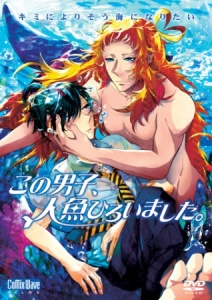 Called This boy caught a merman in English, it’s about Shima Kawauchi (CV: Yuuki Kaji) whose parents divorced when he was little. Both his parents wanted him to live with each of them, putting him in a tough spot, but his grandfather saved him by taking him in. So when his grandfather died, we was all alone. In a moment of anger, he threw the ashes of his grandfather in the ocean, but immediately changed his mind, rushing into the water even though he can’t swim.

And he’s saved by a nameless merman. Because Shima’s says he’s alone, the merman starts living with Shima. Shima names him Isaki (CV: Hikaru Midorikawa) and they eventually become very close to each other. But Shima still feels alone, and he eventually opens up to Isaki, who gives him an advice, which Shima follows, making him stay out late with his friends.

Now, Isaki becomes lonely and certain that Shima doesn’t need him anymore, so her decides to return to the ocean. When Shima finds out, he hurries to the beach and then jumps into the ocean when Isaki doesn’t come out. And they then return home, living together.

It’s a very sweet love story, not only loosely based on, but also referring to Hans Christian Andersen’s The Little Mermaid. It’s, just as the previous ova, deep, dealing with an issue of being alone in the world, even if you are surrounded by people who’re supposedly love you. And it’s also about being loved for who you really are, regardless of who you are.

I liked both of these. I love the aesthetics, and how they have more of an artistic approach than the typical art you see in anime these days. It’s a nice change. Both stories are, although short – 30 minutes each – very nice and deep. I would had like the second one to be a bit longer so you could see Isaki’s and Shima’s relationship grow and actually see the development Shima makes as a person – he kind of just skips into his “real” self. In the first one I would had like more of  Kakashi’s thoughts and confusion, but also I’d like to see more of Arikawa and Shiro. But even so, both of these are well made in many ways.