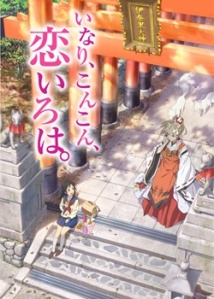 Inari Fushimi (CV: Naomi Oozora) loves the local Inari shrine. She is also in love with Kouji Tanbabashi (CV: Hiroshi Okamoto). One day she helps a fox pup and soon after she visits the shrine while frustrated and she wishes to be the girl she thinks Kouji is in love with, Akemi Sumizone (CV: Iori Nomizu). As thanks for helping the pup the goddess of the shrine, Ukanomitama-no-kami (CV: Houko Kuwashima) (Uka for short), grants her wish and Inari is suddenly Akemi…

This is a… well, to be honest, I don’t really know where to put it. It seemed like it would be a love comedy, but Uka’s and Inari’s relationship is in focus and Inari’s love is just some sub-story with barely any progress at all during the 10 episodes this show consists of.

I don’t know. I didn’t like it, nor did I dislike it. It just didn’t feel fulfilling to me.

But what show during the winter season didn’t make me feel like that, really?

The animation was well done though, and the intro and outro music was pretty good too. The intro was by May’n and the outro was by Maaya Sakamoto (except in episode 10 where the switch and episode 9 where the ending was by Uka’s voice actor, Houko Kuwashima). As for the rest of the soundtrack… I have no memory of it what so ever. I guess it was pretty bland, or I just didn’t listen because the show itself made me lose interest. (lol)

Overall, I liked the idea and it was good in comparison to a lot this winter season, but it just wasn’t actually good.