The Trump Kingdom has been taken over by King Selfishness (CV: Houchuu Otsuka) and the princess of Trump Kingdom, Marie Ange (CV: Yuka Imai), and the last surviving Cure, Cure Sword (CV: Kanako Miyamoto), flees to our world through a mirror, but are separated when the princess tries to protect Sword from their enemies.

In our world, Mana Aida (CV: Hitomi Nabatame) – an instinctively good-natured person who loves helping people – become Cure Heart when she encounters her first Selfishness, and her friends Rikka Hishikawa (CV: Minako Kotobuki) and Alice Yotsuba (CV: Mai Fuchigami) join the cures to fight the Selfishness with their best friend.

IT WAS SO PROMISING IN THE BEGINNING! LIKE THE FIRST EPISODE. The more I watched after Sword/Makoto Kenzaki (CV: Kanako Miyamoto) joined the group it just spiraled downwards and was painful to watch. I cried not because I was moved but because it was bad. I NEVER CRIED BECAUSE SOMETHING IS BAD BEFORE.

Let’s me just explain how much this show failed.

Story: They tried to have a concentrated story – which isn’t bad in itself – BUT FAILED COMPLETELY AND T ENDED UP ALL OVER THE PLACE AND REALLY JUST BECAME NO STORY. I felt like I was watching fillers. From the start.

Characters: THEY DIDN’T AT ALL USE THE POSSIBILITIES AVAILABLE WITH CURE SWORD. She became a whiny bitch who seemed to know about as much about fighting as the rest of the girls. Rikka and Alice are like… they just exist. AND MANA IS LIKE THE MOST FLIRTATIOUS CHARACTER I’VE SEEN IN AN ATTACK. I don’t know where they were going with that shit.

Attacks: A NEW ONE WAY TOO OFTEN. I mean, when it started, I thought they were supposed to collect Loveads or something, BUT 13 EPISODES IN THEY START TALKING ABOUT ROYAL CRYSTALS AND THERE ARE 5 OF THEM. Like, what? Also, 15 episodes in, they have gone through 3 attacks – the first, basic level one, the second level attack using a tool which looks the same for everything but gives different attacks for each and everyone and a third – joint – attack. In Heart’s, Diamond’s and Sword’s (well, technically not Sword’s) first appearance the girls could cleanse the Selfishnesses, BUT AFTER THAT IT’S LIKE CURE HEART WAS THE ONLY ONE UNTIL ACE (CV: Rie Kugimiya) APPEARS. THEN, AGAIN, THEY CAN’T AFTER ACE DID A COMBO WITH ALL OF THEM. LIKE, WHY?!

Enemies: I get it. All the enemies are selfish and can’t coöperate. THAT’S FINE. BUT DON’T JUST THROW IN REGINA (CV: Kumiko Watanabe) 10 EPISODES IN LIKE “YOU ALL SUCK AT THIS AND YOU BARELY TRIED SO HERE THIS RANDOM DAUGHTER OF KIND SELFISHNESS APPEARS FOR NO REASON (other than they mentioned King Selfishness was getting impatient)”. They’ve added a new enemy before – it’s not weird in any way – but that was to either get the story forward or power up the enemies. As an example, in Smile Precure – the installment before Dokidoki – Joker isn’t actively fighting the Cures most of the time, but leave it to the others and instead give them new, powered up clown noses to call forth the Akanbe.

There’s a lot more though and it really tries to be what it’s not, and fails on every possible level. 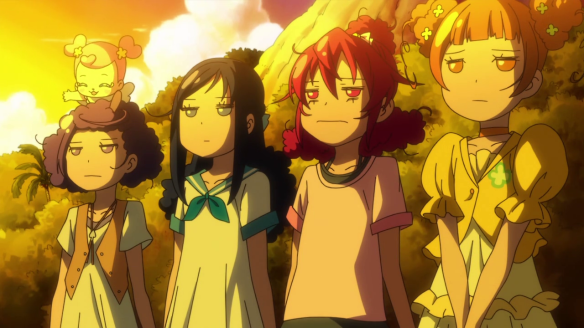