One day while in the garden Alice Liddell spots a white rabbit in a suit. It talks and then turns to human, before taking Alice to Wonderland. There an adventure resulting in love awaits her.

Alright, I admit, I just winged that. I didn’t even get through the free parts of this game because the translation was utter crap. Sometimes it looks like Google Translate, sometimes it makes no sense and at times the spelling is… well, some stuff gets a new meaning, and sometimes not a very good one.

But let’s not speak of what can’t be explained, let’s show it. You start by naming the heroine, which is by default named Alice. No wait, excuse me, Alice=Liddell. I never got that. Given name equals family name? Makes no sense. That aside, you write in chosen name and then confirms. nothing wrong with that.

Great, the sign is complete! Wait… What sign? I never made any SIGNS. Does she walk around with a sign with her name on it? That would certainly explain things later on. 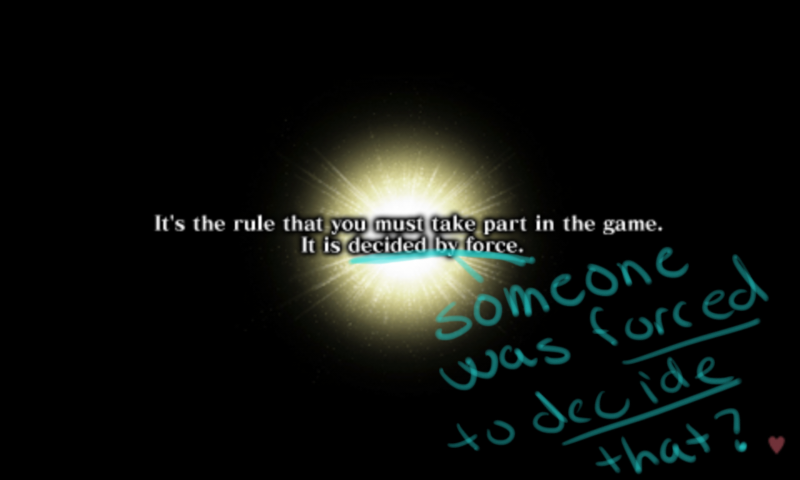 Like… what? These are just the first 4 screens. And not so bad actually. I’ll leave the rest of the screenshots as they are.

I think this somewhat gives a pretty good idea what we’re dealing with. Some things make more sense than others, some seems to make much more sense out of context than when I was screenshotting it . But I got one more. 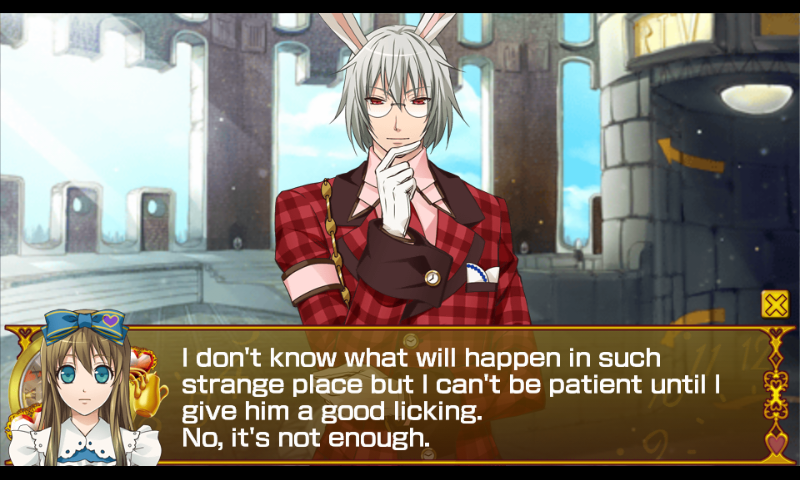 This line takes place after Peter forces Alice to drink something by mouth-to-mouth. Yeah… Go for it Alice… Lick the guy who basically just kissed you to make you drink some weird potion. How I feel about this translation is…

Imagine Peter as the translation and we’re on the same page.

The amount of story I’ve played isn’t bad in itself – the game is originally a PC game with both ports and a remake and several follow-up games. No, the real issue is the translation. It’s Google Translate-y with (naturally) grammatical errors, weird choices of words at times and missing words, but also got spelling mistakes and sometimes I’m just wondering what cryptic messages I’m reading.

Of course, just a tiny portion of the game is free and if the free chapters aren’t even worth my time because of the translation, I can’t say paying for them is worth your money. Stay away from this and learn Japanese to read this in the original language instead. The game’s original name is Heart no Kuni no Alice ~Wonderful Wonder World~ which could be translated as The Heart Land’s Alice or Alice of the Heart Country or something. I’ve previously reviewed the film based on the game/comic.

And if you just want an Android otome game, play 10 Days with My Devil instead. Or MoteMote which I reviewed in the past before the relaunch. The latter has a free version I totally thought was worth playing.

All reviews may contain both spoilers and affiliate links. Affiliate links are always at the bottom of the review, and will always be noted as a way to support the blog.