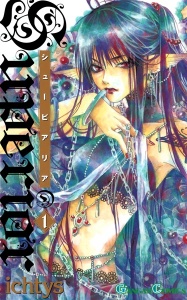 Exa is the Hero of humans in a world where demons and humans co-exist, but war against each other. Sheila is the Demon Queen and her goal is to kill the Hero and exterminate humans so that demons can live in peace. One day she gets her chance to kill the Hero, but as she seems to be attacked by a dragon, the Hero saves her and Sheila changes tactics to pretending to being weak and having fallen in love with the human. She then starts following the Hero on his journey to defeat the Demon Lord without killing demons, hoping to get an opportunity to kill the Hero before he kills her.

Superior is followed by Superior Cross which the comic was renamed to when it migrated from Gangan Powered to Monthly GFantasy. This post covers both even though I didn’t write out both titles.

This is a very interesting story about how a demon supposedly without any kind of compassion and care for others, change after she feels the warmth of being trusted and cared for. But just as humans think demons are cruel, so does demons think about humans and the reason Sheila is the Demon Queen and her purpose is to exterminate the humans is because the humans set out to kill the dragons and then the demons, and Sheila lost a friend she loved – a dragon she kept as a child.

At the same time Sheila is also the reason why Exa decided to become a Hero. His village was destroyed and everyone besides him was killed and he and Sheila got to exchange some words before Exa was saved by a man and Sheila’s advisor forced her to retreat. During this conversation he felt that both demons and humans were alike even if the Demon Queen he was talking to seemed like a cold-blooded and uncaring demon who just wanted to kill every human because she was strong. Hence his reason to only kill the Demon Queen.

Two broken children of war, set out to kill each other, end up falling in love when they meet several years later, unaware they have met before. One re-discovers love and compassion through the other and doesn’t want to see death and suffering anymore. The other tries to fight love to keep fighting, but fights doubt that comes from hearing the companion might be an enemy.

I think this is a very deep story and to me this not only shows what war can do to people – because demons could be seen as a metaphor of “the enemy” – but also what can blossom if you try to fight against war. Sadly the second part, Superior Cross, wasn’t as good as the first and Sheila’s copy lost her importance from the very start of the second series, which was a bad move by the author, in my opinion, especially the end when an “original” demon lord is added to the mix. It just turned to way too ridiculous with the kind of love conquers all and good always wins kind of end.

The end was pretty meh, but overall the series was pretty good and I do recommend the first part.