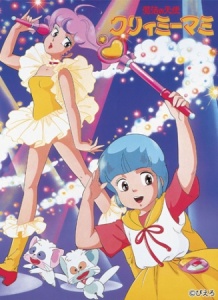 Yuu Morisawa (CV: Takako Oota) receives a compact mirror as a gift from some magical beings. When she finally figures out how to use it she transforms from a 10 year old to a 16 year old and she takes the name Creamy Mami and becomes an idol after singing at stage once. She can’t tell anyone her secret and when her friend and boy she loves, Toshio Ootomo (CV: Yuu Mizushima) falls for the new idol, she needs to be careful to hide her true identity, so that he doesn’t find out as he always is where Creamy Mami is going to be, and so is Yuu.

Let’s just start with some of my earliest reactions to the show:

My avatar really fits what I’m ffelin right now, but I need to saw it with words: This guy is disgusting. #CreamyMami pic.twitter.com/5Vz2Ugd8pW

Creamy Mami was probably very funny in the 80’s. Actually it would had been like any other mahou shoujo I’ve seen, if it wasn’t for Midori Kisaragi (CV: Masahiro Anzai). Midori is a very disturbing character that I know was supposed to be funny. He’s in love with Yuu and tries his hardest too impress her, but he does some really disturbing things at times that just makes me feel uncomfortable with the entire show.

That being said, Mahou no Tenshi Creamy Mami was the first idol show to come out in the mahou shoujo genre and I give Studio Pierrot creds for that, but because of how uncomfortable I was with the show, I had to stop watching it and I just couldn’t motivate myself to pick it up once again.

I do understand a lot of people think of their childhood when they think of Creamy Mami. But as I wrote in a tweet: I wouldn’t let my children watch this until they are old enough to understand Midori isn’t having a healthy kind of feeling towards Yuu. He’s too obsessed with her, in my opinion, and as a recurring character I feel it’s important to take note of that.

On it as a mahou shoujo and classic anime I don’t have any real complaints. The singing isn’t great, but the animation is typical 80’s and the colour scheme shows it. It has the typical mahou shoujo elements – talking animals, magic objects, transformations… Yep, typical mahou shoujo, just with that idol twist.