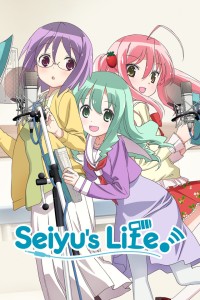 Futaba Ichinose (CV: Rie Takahashi) has been working as a voice actor (seiyuu) for a year now, but she has barely gotten any roles. But now she got her first role as a regular character with Pipo in Bodhisattvon! And she at her new work she is introduced to the more seasoned Rin Kohana (CV: Marika Kouno) and the other newbie Ichigo Moesaki (CV: Yuki Nagaku). The three of them get along so well they are scouted for the web radio for the show. But what will happen to Futaba when her work with Bodhisattvon ends?

THOUGHTS
A show about voice actors means… Lots of appearances by known voice actors! Hiroshi Kamiya talks about his cat, Rie Kugimiya was part of one of Futaba’s early works, and Hoi Yurie – I mean – Yui Horie has a live concert. You also get a bit of an insight of how it is to be a voice actor in Japan. Not to mention, voice actor idol.

This is – if you ask me, which I suppose you do as this is my blog – a show that goes well along with New Game! or Shirobako. Those two cover the creation of games and creation of anime, while Seiyu’s Life cover the work of adding voices – and hence a bit more life – to those media. Shirobako might be more mature than Seiyu’s Life, but the pacing and overall aesthetics and feel are probably similar to New Game! but as all of these titles have a female main cast and cover the background work of things we enjoy they are still very similar in concept. Seiyu’s Life, though, is more focused on the anxiety as a newcomer voice actor, than the work put into games and animated shows as covered in New Game! and Shirobako.

It’s a slice of life show I can imagine some people not enjoying, and I’m certain that it to some degree makes the voice acting career sound better than it really is. But one can at the very least appreciate the work of a voice actor, if one didn’t do so already! While it’s not awesome, I think it’s cute and a bit educational. Seeing some of the most popular and/or loved voice actors play themselves and talk about past experiences (or their cats) is pretty nice, making them seem all the more human – which I think is something we might sometimes forget. If you like shows that look like they might be cute girls doing cute things, but are actually about working people actually working (like the show I mentioned above), then you might enjoy this. And if not, watch it for Hiroshi Kamiya’s cat. And you might enjoy the bits from various anime related songs in the endings of the show.

This post is available thanks to the love and support of my readers and patrons. If you want to support the blog despite the fact I am more or less on maternal leave, read this page!

All posts are unscheduled while I’m on maternal leave, but I still use tags that relate to certain series. Such tags include Mahou Shoujo Monday and Crappy Android Otome Games. Some new may appear as time passes, who knows?

Learn about voice actors and support them (and me) a little while at it.