“No, they’re not.” Sawyer’s face blushed bright red. If Luke wasn’t mistaken, he looked embarrassed. “They can be worse than that.”

Luke’s eyebrows shot up his forehead. “What could be worse than psychopaths?” 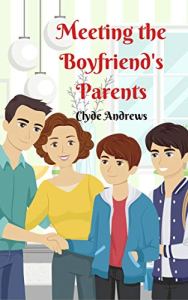 Luke’s crush Sawyer asks him out after the final exams are over. Which was for the better, because Luke couldn’t get the courage to do so himself. And over the first few months of them being boyfriends, Luke truly falls in love with his boyfriend. But there’s always something gnawing in the back of Luke’s mind and the meeting with Sawyer’s parents might just be what makes it clear what it is.

Luke isn’t just gay; there’s something else about him he can’t define. He’s nervous and anxious all the time—and being uncomfortable in his own skin doesn’t help.

I have never related to a blurb of a book so much in my life before as when I read this part. The feeling of anxiety as you’re not comfortable in your own skin and not being able to define why? That’s seriously part of my life.

There’s a good reason for that. Luke is genderfluid, and I’m agenderfluid. So as another fluid person, I know the feeling, even if the core of my gender identity is not having a gender, I’m not always agender and until I understood that… It was so effing freaky, to put it mildly.

I know not everyone reading TAB is falling outside of the norm (which I very much do), but it was relatable to me.

But enough about the blurb.

This is part of the Cute Gay Romance series, which is a series of stand-alone stories, by Clyde Andrews. Cute, Gay and Romance definitely describe this novella and, honestly, I can only call it dorkably adorable. Okay, not really. But I’ll get to that. For the most part, though, it was dorkably adorable.

The main character, Luke, is genderfluid and is sometimes okay with the male anatomy, sometimes not, which is very true for many fluid people. And because I can’t really use a correct pronoun for the character, I will use none for the character for rest of the review. I liked how the fluidity was described and also the indicator of what the gender of the day would be.

It did surprise me at what point the fluidity came up and I just couldn’t understand how Sawyer’s parents guessed the main character was fluid. But for the former, I did something similar in my own web novel which surprised someone reading it, so I guess I shouldn’t be too surprised. And, I guess, to some extent I was bothered by characters seemingly assume fluidity, but because the story’s short, I suppose there’s not much space to truly expand on that. I don’t necessarily mean like “are your fluid?” kinda thing but “I kinda knew” thing. Maybe my agenderfluid butt just doesn’t get it.

The story overall was really nice and I enjoyed it from the very start. It was funny and heartwarming at the same time. The pacing was maybe a little odd, but it can be difficult to get everything you want and need into a novella. This is only 135 pages too, so it’s a very quick read and I couldn’t put it down (until the clock was almost 4 am because, of course, I read it in the middle of the night, and I just really needed sleep), so I can with certainty say the pacing is forgiven.

But it’s not exactly safe for Anny or safe for work.

On an NSFA scale, I’d put it on 5? 5.5, maybe. There are some sexy scenes that are described to some extent, but it wasn’t so bad I ran as fast as I could. Lol. I’d put the sexy scenes on maybe 4 on the discomfort level at most. It was raised later on because of a kinda abusive/toxic scene and it gets a little rapey, even if it ends up being no such thing. Just a fair warning.

The story, however, overcame my discomfort and the NSFA stuff fit into the story, which is an important aspect. It’s pretty much the only way I can handle sexy. So it wasn’t there just because.

“I believe Cody knows where his penis is, son.”

…for the most part, at least. I did feel there was a little too much sexy content for such a short story for my personal taste, but if you’re into guys almost making out in front of their family, this might just be your cup of tea. I mean, just look at the quote above. I personally just felt sorry for the parents, especially as a parent myself, but also for the siblings. Maybe even more so because I’m asexual and just don’t get sexy feels. Which, I guess made me distance myself from the main character as the “different needs” the character had is such a foreign concept for me. Well… The “need” itself is a foreign concept for me.

I mentioned the main character, but I haven’t talked about Sawyer. Best partner. I mean, I have someone I love and who loves me in return and he doesn’t mind I sometimes identify as a guy and he’s very much not gay. Everyone needs boyfriends, girlfriends and/or partners like that. I mean, I get if some people would think it’s wild he’d be okay with it, but acceptance is key here, and so Sawyer is the best partner.

Having people to talk to that understood him, listened to him, and above all, accepted him, was the greatest gift Lukie could ever be given, he knew that with all his heart and soul.

I would like to mention the alcoholic parents though, but I don’t seem to figure out where to add that, so eh… here we go? Did not really like they kinda joked about it? Or really pointed out they were alcoholics, but yeah… they clearly were. Easy to figure out, to be honest.

So, as a whole, I really enjoyed this short read story-wise. It had things I wasn’t comfortable with, and while it’s important for stories to get sexy too… eh. I could identify a bit with the character,  but if I had been, say, ten years younger I would probably have just stared at it and wondered what was going on. If I got past the first instance of snogging, that is. I am fairly certain I wouldn’t have. While I was way more into guy + guy fiction when I was 18-19, I had like no tolerance. I guess I built that up over the years. I had a good laugh, got emotional and genuinely loved the couple. There are definitely more good points than bad. Not to mention, the message I could get interpret from this is an important one.

This is coming out on Tuesday (January 14th, 2020), but you can preorder it on Amazon if you’d like. I’d say it’s worth it if you’re into gay/LGBTQ fiction and not as uncomfortable with it as I am. And just so you know, I don’t have any affiliate links for this post and the link to Amazon is just a normal link because none of my affiliates has it at the moment (and might never).

What would you like to see a review of next? Non-romance? Straight romance? Isekai? Let me know in a comment!

Wondering what has been reviewed in the past? Check the Master List!

Want to chat with other lovers of games, books, comics, anime and more about these or other things? Join The Anny Blog on Discord!