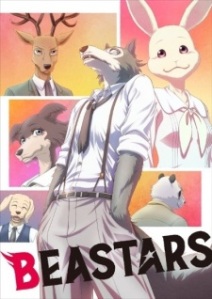 Legoshi (CV: Chikahiro Kobayashi) is a wolf, but he is cautious not to scare the herbivores, as there is tension between carnivores and herbivores. One day he needs to get flowers from the gardening club and meets the dwarf rabbit Haru (CV: Sayaka Senbongi). They didn’t know what they signed up for when they began talking with one another. Especially since Legoshi had tried to eat the rabbit the night before…

That was the first thought I had after I finished the first episode. I had seen some seemingly ridiculous stuff from it, so I wasn’t really expecting much, even though I had seen a recommendation of it on Twitter saying it wasn’t like the meme.

Now, I happen to hoard anime (even ones I don’t expect to be good), and Asian live-action shows on my list on Netflix, just in case I decide to watch them or get a recommendation for them. Or to give a second try. (I’m looking at you, fate/stay night.) So when I saw Beastars was available, I added it to my list together with some other new additions.

Then I wondered what to watch. Beastars had a big banner at the top, so I just shrugged and decided to give it a go. If it wasn’t any good, I could just throw it in a batch post and write why. I expected it probably would at least be worth watching for the animation itself and thought it might at least be semi-serious, since it’s marked as 16+ for violence on Netflix in Sweden/Scandinavia. Or it would just be violent for no reason.

That said, it was way more serious than I expected.

That’s not a bad thing, though. I love stuff like this. Internal and external conflict that also clash with one another? Fantastic!

The story depicts prejudice and feelings of oppression. It also is about self-discovery and self-acceptance. This has a mystery mixed into it that has yet to be resolved at the end of season 1. I initially thought the mystery would be the main plot, but it ended up being the subplot, and there were just a handful of reminders that an incident happened.

I like this kind of slow mystery, and I also love bittersweet and heartbreaking love stories, so this is, storywise very good. I know a lot of people still have a problem with CGI, but it was really well done in Beastars. I think it showed the potential that CGI has, and wouldn’t mind more or it. If you are on the fence because of the graphics, go on, do see it.

There is no real political agenda in the show, at least at this point, and there is no one saying either side is more right. I think it depicts how the real world is. Some are considered stronger, others weaker. Some are supposed to be together, others not. We’re encouraged to be friendly with one another, but we’re still drawn to groups that feel familiar.

There is some violence – mainly at the end – so if you have a problem with violence or animals eating others, you should probably stay away. Same if you’re not into interspecial implied sexy stuff. Otherwise, I do recommend the first season. I’ll review the second planned to air next year as well, or I might pick the comic up (or both).