“If drinking within Cloud Recesses is forbidden, I can drink on top of the wall. That way I won’t break the rules, right?”

Gi Musen (CV: Tatsuhisa Suzuki) wonders what on earth could have happened during all these years for Ran Bouki (CV: Satoshi Hino) to be so different; he’s fine if Musen touches him, he hides alcohol in his room… Thinking about these oddities, he remembers their first encounter that eventually would lead them to this day when Bouki just won’t let him go.

Season 1 Short: “Escape” (3 minutes 34 seconds)
Musen escapes, but is immediately apprehended by Bouki. He makes a scene in the middle of the night. Musen tries in vain to convince others Bouki is kidnapping him. They get a little hesitant when Bouki says it’s fine, while Musen is desperately trying to get them to help. When they’re back, Musen wonders why Bouki can’t just give up, because Musen is tired of trying to escape after twelve times…

Musen is a guest disciple at Unshin no Fuchisho, but having heard of the Gusu’ famous liquor, he just had to try it. However, he gets caught by a disciple, and he tries to bargain himself to not be reported. In response, he’s told alcohol is prohibited, and he in turn complains about the 3000 rules they have. But he figures that if he’s not within Unshin no Fuchisho, he could drink just fine. The disciple won’t let him and a fight ensues.

They’re stopped by Kou Chou (CV: Hikaru Midorikawa), who tells Musen not to make trouble for him, because he won’t help him out, but Musen knows very well that Chou wouldn’t leave him to fend for himself, no matter how much trouble he makes.

In the morning Musen and Chou head to their classes, and are joined by Jou Kaisou (CV: Yoshitsugu Matsuoka). Musen asks about the teacher and Kaisou tells him it’s Ran Keijin (CV: Tarusuke Shingaki) — a man rumoured to (somewhat) tame any problematic student. But it’s not the teacher one should be wary of — it’s Ran Bouki. Musen asks if he’s good-looking and Kaisou tells him that’s obvious. Musen figures out it’s Bouki he met the evening before and explains he got caught while trying to sneak some alcohol in and they fought a bit.

During the lecture, Musen gets bored out of his mind and begins bothering Chou, who doesn’t want to be in trouble, so he tells him to be quiet. Keijin still notices and asks questions that Musen has to answer. After asking several questions that Musen answers correctly to, he gives him a problem, asking how to solve it. Musen doesn’t reply right away, and Keijin turns to Bouki, who gives the answer right away.

Realising he’d being made a fool in front of the class as an example, Musen points out it wasn’t that he didn’t know the answer, but he was thinking of fourth solution, explaining one could — possibly — make use of the evil energy in a vengeful spirit, instead of purifying or destroying it. His way of questioning the proper ways of dealing with ghosts and demons enrages Keijin. He asks how this way of using the energy would work, and Musen says he hasn’t found a way. He’s told that when he does, he doesn’t have a space in their world and to get out. So he leaves, followed by laughs from students.

He is later found by Chou and Kaisou. The former scolds him, while the latter is amused by the way Musen left the teacher dumbstruck. Kaisou is also interested in what Musen said, since he has no talent for cultivation and so wouldn’t have to struggle with Musen’s way. But Musen has no plans on taking up such a dark form of cultivation like that; he just answered the question.

Musen wants to go hunt pheasants, but he has detention. However, Kaisou offers to write the copies for him, but when he’s about to tell him what he wants in return, Bouki appears. Musen tries to greet him, but he is blatantly ignored. Musen wanted to apologise, but it seems Bouki just hates him that much.

They go back to Kaisou’s end of the deal which is for Musen to help him with the test, because he can’t remember anything and it’s already his third year. But during the test, Bouki catches them and Musen gets punished for cheating on the test. For the next month, Bouki has to watch over Musen’s punishment.

During the punishment, he asks for Bouki to forgive him and for him to not have to do all the copying he’s asked to do, but as it’s Keijin’s orders there’s little to convince him otherwise. So he grumbles how Bouki isn’t as good as people make him out to be, and girls would be disappointed if they knew how he really was.

Bored, he tries to get Bouki’s attention, but when he can’t he calls him (Ran) Zan instead (ie, it’s either intimate or offensive, depending on the situation and person), which Bouki isn’t happy about. He tells Bouki that he can call him (Gi) Ei instead of Musen if that pleases him. He tries to ask him if Bouki truly hates him that much, but is ignored again. He tries to reason with him, but gets no response. He keeps wanting Bouki’s attention, but it backfires.

A month later, it’s the end of the detention and Musen has painted an image of Bouki but is told to do something more useful with his time if he has enough to paint pictures, but Musen tells him he’s all done and won’t come the next day . Musen then says he forgot to paint a flower hair ornament, but soon says he’ll stop fooling around and asks Bouki to keep reading. To Bouki’s horror, he finds something… eh… indecent in his book, but Musen is overjoyed. Bouki asks for a duel, but Musen reminds him it’s prohibited to fight. He also points out Bouki can’t go with it to his uncle, since Keijin might doubt him . In a fit, Bouki destroys the book, to which Musen says it’s not good to ruin borrowed things.

And Bouki completely looses it at this point, and Musen keeps provoking him until he escapes.

He joins Chou and Kaisou and while Chou doesn’t want to have anything to do with it, Kaisou is ecstatic, having heard someone like Bouki shout “get lost”. And Musen finds some pride in having got Bouki to lose it, which Chou finds ridiculous, but Musen wanted to apologise. But after getting no response on that, a bit of teasing should be fine, right?

Fortunately for Musen, Keijin left and won’t be back for a few days, meaning there will be no lectures either. Of course he wants to hunt pheasants again, but sees two Boukis and finds out that one is Bouki’s older brother, Ran Gishin (CV: Toshiyuki Morikawa). So he calls out to them, introducing himself to Gishin. When asked where they’re going, Gishin tells them, though Bouki interrupts. Musen asks if he and Chou can come along, since they’ve done plenty of water ghoul extermination, and Gishin allows it though Bouki tries to be against it.

THOUGHTS
This is a fun episode that keeps the same quality as the other episodes. I especially love how Hino’s voice softens, and LWJ gets more expressive after having been forced to spend a month watching over WWX. It’s just so adorable! And this episode in particular just fills me with happiness because they’re so cute! Too adorable! I can’t!

The background music doesn’t pale either, and it continues to be a fantastic piece of work to listen to and truly bring the characters to life. Even after listening to it several times, I still can’t get enough and every time I feel like I notice something new.

I still can’t unhear Toma, though. It’s really, really jarring, though also unironically kind of fitting. I will probably not ever unhear Toma.

So, anyone into MDZS or interested in it but doesn’t know Mandarin (and can’t watch The Untamed or the MDZS donghua) should give it a go. But then again. By now my obsession is more than obvious. I mean, this has been my name on Twitter for months:

And Cas even told me it feels like I’ve been into this for a decade.

Did you like this review? Let me know in a comment! Or tell me what you think of MDZS! Or anything else.

Want to chat with other lovers of any forms of fiction and creative work? Join Anny’s Cosy Cottage on Discord! You can also follow The Anny Blog on Twitter for updates and live-tweets, or The Anny Blog on Instagram to get some scarce behind-the-scenes content.

Get the CD here. Or why not get the original novel now available in English? 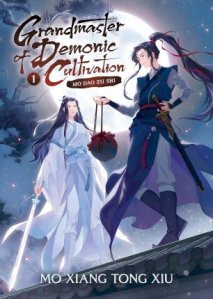