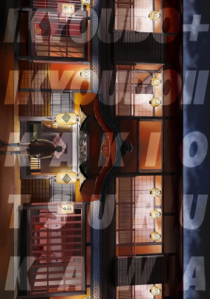 Rokunosuke’s the son of a poor farmer with no money to pay the cruelly high taxes. One day when he’s off helping another farmer, his father is brutally killed and his home burnt to the ground, so he decides to avenge his father. However, Oyuki changes his mind, but it only lasts for a while…

This is the other book I got from Star Fruit Books to review. It caught my interest because of the combination of sci-fi and historical. I don’t usually pick out sci-fi, because my mother managed to make me incredibly averse to the genre, but I’m also trying to widen my horizons now that I’m older. So I was very happy to find something interesting.

THOUGHTS
I’ll admit, had this ended with just Ikyoudo, I would have probably frowned. The story’s good, but the story would have been cut off at an odd place for me. It’s one of those stories where there’s a lot going on, but it’s also not cluttered with things. Instead, there is just enough backstory to understand Rokunosuke even if there are only so many events that can be fit into roughly a hundred pages in a manga. There’s enough space for some backstory of other characters as well, although it doesn’t have the space to go extremely deep into it. It leaves the reader with some questions unanswered, but not all question marks need to be straightened, in my opinion. I like how there’s still some mystery remaining about things.

I think this if for those who have an interest in supernatural historical stories and want a quick read. It’s not heavy in the “science” part, so it felt more like my fantasy choice of fiction, which is pretty down to earth, even when there’s magic involved, or any of my supernatural picks in general.

I do want to note there’s some violence involved, so I’d say it’s about 8.5 on my NSFA scale, especially since it’s visually gory violence at that.

This post is available thanks to the love and support of my readers and patrons. If you enjoyed this post, drop a tip on Ko-fi, subscribe on Patreon, donate through Paypal, like this post or give me a comment. All funding goes directly to the blog so I can keep it going.

Join 578 other followers
Follow The Anny Blog on WordPress.com