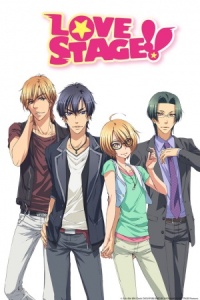 Izumi Sena (CV: Tsubasa Yonaga) has a family consisting of celebrities. His mother is the actress Nagisa Sena (CV: Sayaka Oohara), his father is the singer Seiya Sena (CV: Ryoutarou Okiayuu) and his brother is SHOGO (CV: DAIGO) from the rock band Crusherz and so he’s expected to go into the showbiz world too. But that’s not Izumi wants! He was traumatized when he suddenly had to be in a commercial when he was 8, and blossomed into a nerd who wants to become a mangaka. One day, however, the sponsors of the commercial Izumi was in 10 years ago wants to make another commercial. Izumi’s co-star from the commercial, Ryouma Ichijou (CV: Takuya Eguchi) only accepts if the actors are the same as when he was a child, and so Izumi has to do one other commercial. Who would had thought it would turn his entire life around from that one commercial? END_OF_DOCUMENT_TOKEN_TO_BE_REPLACED