I chose the NEET life. I’m an elite NEET. 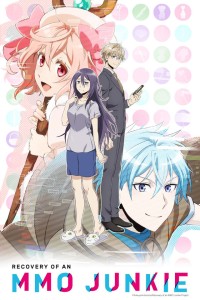 Moriko Morioka (CV: Mamiko Noto) has resigned from her company and is now a NEET with no plans on working again any time soon. As she looks at her computer she decides to play NantarSG, but in the past 6 month of not playing, the service has been terminated. She does a search for recommendations and decides to play Fruits de Mer as the hot male character, Hayashi (CV: Ryouta Suzuki). In game Hayashi meets Lily (CV: Reina Ueda) and Moriko finds relief from reality. END_OF_DOCUMENT_TOKEN_TO_BE_REPLACED

Where did I come from?

Where am I going?

The year is 1853 and the Royal Guard is on a mission to catch a monster. They have found the unkept mansion and there they find a girl. A girl with poisonous skin and blood. Without any resistance Cardia is captured and to some extent she is relieved as she thinks that she might be killed. She has spent the past two years alone after all. She needs to be alone to avoid hurting anyone. But the girl, who is not supposed to know love, is taken away from the Royal Guard by the Dashing Gentleman Thief and her story of love is beginning. END_OF_DOCUMENT_TOKEN_TO_BE_REPLACED

Eijun Sawamura (CV: Ryouta Oosaka) lives at the countryside and loves baseball and is the pitcher of his middle school team. His team, however, isn’t that great and they lose a match in the preliminaries, in which Eijun throws a stray ball the catcher couldn’t catch. But on that math, a scout happened to be there watching and she tries to recruit the young pitcher to Seido. During a visit at the school Eijun gets angry at one of the players and duels him, winning the duel and changing his life. He decides to go to that school and become their pitcher. But on his first day, he’s late and isn’t even allowed to practice with the team, but has to run and that’s all he can do. Now Eijun has to prove he’s good enough to practice with the baseball players and prove he’s the one to stand on the mound. END_OF_DOCUMENT_TOKEN_TO_BE_REPLACED

Elder Tale is a game with a lot of players around the world. There is a new expansion for it, and a lot of people are happy to play it. But when they start playing the new version, something is completely wrong. They are not just playing the game, approximately 30 000 Japanese players are stuck in the game. One of these players is Shiroe (CV: Takuma Terashima), a well-known player who is known for once being the strategist of a party called Debauchery Tea Party. He teams up with his friend Naotsugu (CV: Tomoaki Maeno) and an assassin called Akatsuki (CV: Emiri Katou) to deal with the new challenges they have in this new life they now live. END_OF_DOCUMENT_TOKEN_TO_BE_REPLACED

Join 581 other followers
Follow The Anny Blog on WordPress.com