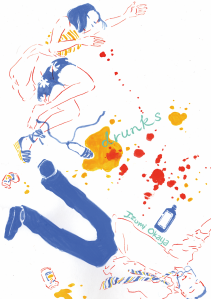 This consists of two short stories. The titular story, Drunks, is about a man who is dragged out to drink. When he’s on his way home, he meets a woman who bites him. He wakes up the next, thinking it was a dream, but turns out he really came across a vampire.

The second is titled Tick Tock, and relationship between a woman who had been asleep in cryostasis for over a century and the descendent of her brother.