This batch is the shows I dropped during this winter season. I didn’t pick up all this time, but I think I gave the majority available in Sweden on Wakanim and Crunchyroll (combined) a try. 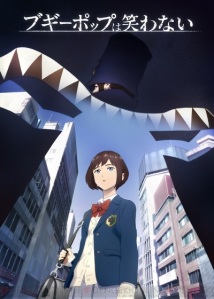 Boogiepop and Others
An urban legends tells that Boogiepop will relieve you from life, but few knows the truth. One who does know though, is Keiji Takeda (CV: Chiaki Kobayashi) because it turns out his girlfriend has Boogiepop (CV: Aoi Yuuki) sleeping in her subconsciousness, waiting for the abnormalities to show up and to remove them from this world.

This seemed like a good psychological mystery/horror show and I watched a lot of it at once. But then I just got bored after a while and stopped watching. And I guess that says enough.
END_OF_DOCUMENT_TOKEN_TO_BE_REPLACED 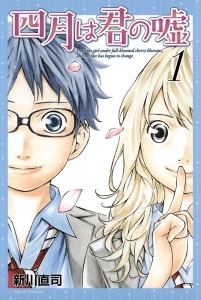 Kousei Arima (CV: Natsuki Hanae) used to play the piano, but after his mother died he lost the ability to hear himself play and he stopped. One day he is asked to go as Friend A with his friends Tsubaki Sawabe (CV: Ayane Sakura) and Ryouta Watari (CV: Ryouta Oosaka) and the fellow classmate of Tsubaki and young violinist Kaori Miyazono (CV: Risa Taneda). The young violinist start to violently and forcefully changing Kousei’s life after their meeting, and little by little Kousei is forced to deal with all his past demons and the ghost of his mother. 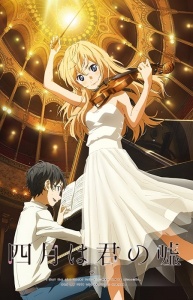 This is a story by Naoshi Arakawa that really wants to tell you something and the original comic is well made although I saw a few issues in the art once in a while. The pacing was messed up in the anime as they too religiously followed the original work, but it doesn’t change the beauty of this work. The story ends in my favourite way – bittersweet – and the general theme here is classical music. A question it rises for a fellow classical musician, as myself, is “Should you play as you wish, or follow the score to every point?” Another question that would go for everyone is “Are you ever ready to give up?” END_OF_DOCUMENT_TOKEN_TO_BE_REPLACED 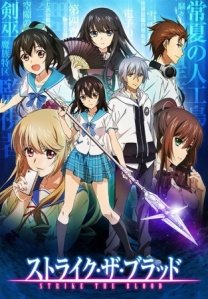 The legend says that the strongest vampire is the Fourth Progenitor, but it’s just a legend, because there is only three progenitors. For his entire life, Kojou Akatsuki (CV: Yoshimasa Hosoya) has been your average male student, nothing more and nothing less. But one day the Fourth Progenitor sent her spirit into Kojou and he’s now the one of legends. Keeping it secret isn’t an easy feat as his eyes turns red when he gets urges for blood, but he can’t let anyone know he became a vampire either. And now Yukina Himeragi (CV: Risa Taneda) was sent from the Lion King Organization to supervise Kojou and kill him if he is evil. END_OF_DOCUMENT_TOKEN_TO_BE_REPLACED 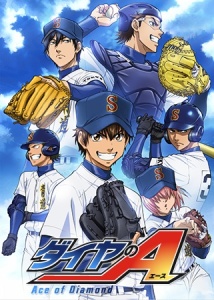 Eijun Sawamura (CV: Ryouta Oosaka) lives at the countryside and loves baseball and is the pitcher of his middle school team. His team, however, isn’t that great and they lose a match in the preliminaries, in which Eijun throws a stray ball the catcher couldn’t catch. But on that math, a scout happened to be there watching and she tries to recruit the young pitcher to Seido. During a visit at the school Eijun gets angry at one of the players and duels him, winning the duel and changing his life. He decides to go to that school and become their pitcher. But on his first day, he’s late and isn’t even allowed to practice with the team, but has to run and that’s all he can do. Now Eijun has to prove he’s good enough to practice with the baseball players and prove he’s the one to stand on the mound. END_OF_DOCUMENT_TOKEN_TO_BE_REPLACED 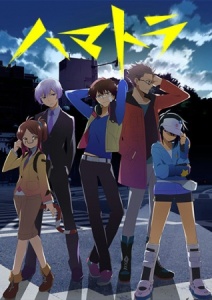 A small percentage of people have a special power called “Minimum” and these are called “Minimum Holders”. There is a special school for the children potent to be a Minimum Holder, and the graduates usually get jobs high in society. The group making up the Hamatora Investigation Bureau however have chosen not to take such jobs. Nice (CV: Ryouta Oosaka) together with his partner Murasaki (CV: Wataru Hatano) and their friends use their power to investigate and help people in need. END_OF_DOCUMENT_TOKEN_TO_BE_REPLACED

Titans have conquered the earth and humans have fled into tall walls to keep themselves safe from the threat. The only ones that can leave the walls are a special unit of soldiers, but the majority of them never return from their mission. One day the outer wall, Wall Maria, falls and the titans enter. People are evacuated, people are eaten by the titans, and Eren Yeager (CV: Yuuki Kaji) was there to see it. He saw his own mother get eaten and he couldn’t do anything about it.

This makes him determined to kill all the titans and to reach his goal, he becomes a soldier. He’s refuses to accept defeat, but the day before the trainees are supposed to choose which unit to join, the titans attack again. And this time, Eren himself is eaten while his best friend Armin Arlert (CV: Marina Inoue) can’t do a thing. END_OF_DOCUMENT_TOKEN_TO_BE_REPLACED